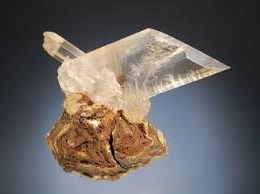 Selenite, a variety name applied to crystalline gypsum, is a fairly common sulfate mineral. Several statewide localities have produced specimen quality examples of the species. Although the average size of these crystals is generally smaller than those from some other statewide localities, the Ellsworth locality has been noted for producing some of the clearest and most well formed Selenite crystals in the state.

Selenite crystals from this locality range in size from less than 2 mm to nearly 6 cm. Crystals of the larger size are extremely rare. The average crystal is typically 1-2 cm in size. Many of the crystals are grayish in color, having inclusions of the clay which helped form the crystals. Occasional crystals will have included other small rocks from the clay.

Also, crystals attached to roots or other vegetation are not uncommon. The most well formed crystals tend to develop in certain layers of the compact bluish gray clay, typically 4-8 inches beneath the surface. However, it is important to note that there are several layers of the blue clay, and not all layers develop abundant Selenite crystals.

The reason for this remains unclear. The clay which can be found at the surface is generally light tan in color and is mixed with soil. Although often free of included sediment, Selenite crystals which form in this upper clay are typically rounded and corroded, possibly due to dissolution by rain water.

At the Ellsworth locality, Selenite crystals have been observed in a few different habits, ranging from single crude or sharp crystals to twinned crystals and groups. However, the basic crystal form exemplified by these crystals remains somewhat constant. As illustrated in Figure I, to the right, Gypsum forms prismatic crystals in the monoclinic system.

While a few crystals from this locality will be true to form, most are somewhat distorted, with slightly to moderately unequal prismatic faces. In this system, no crystal can be complete without the use of multiple crystal forms. The most basic crystal form, labeled A, is comprised of four pairs of prismatic faces(2 pairs of macropism face (l) and two pairs of unit prism faces (m)), and one pair of clinopinacoid faces (b).

This crystal form is dominated by the clinopinacoid face (b) and is always elongate along the macroprism face (l). While this form is occasionally observed, the more common Selenite crystal observed at this locality is labeled B. It is quite similar to the basic form, A, but slightly more complex with the addition of one pair of macrodome faces (e).

The photo to the lower right displays a perfectly formed Selenite crystal without the Macrodome face (e). This macrodome face (e), which occurs perpendicular to face (m) is almost always rounded or rough and often concave. On sharp crystals, the clinopinacoid face has distinct striations parallel to face (m). Rare, crystals with multiple terminations have also been observed at this locality.

Typically, but not always, these occur when the crystal was forced to develop around rocks in the clay. The crystal displayed in the photo to the left is an example of this.