This week’s featured write up discusses the properties of Barite; a commonly found mineral in the US. Check it out below…

A common misconception among Ohio collectors is that barite is a rare mineral throughout the state. A more accurate statement is that barite is an uncommon mineral at most well known mineral localities in Ohio, with the exception of the Custar Stone company quarry. 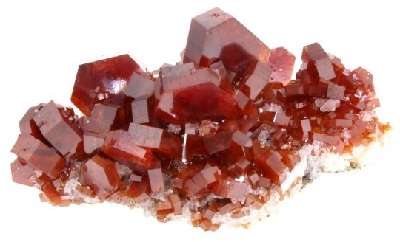 The reason for this is that many of Ohio’s best known localities are Silurian age dolostones which generally do not produce the mineral. Statewide, barite is frequently observed at Pennsylvanian and Devonian age localities including the Monroeville locality.

However, while barite is one of the more common minerals to occur in septaria at the Monroeville locality, it is perhaps the most difficult mineral to obtain in complete crystal form. This is, in part, due to the tendency of the mineral to develop very large crystals. Bladed barite crystals, typically unterminated, as large as 50 cm have been observed in these septaria.

Unfortunately, it is highly unlikely that a large bladed crystal on matrix would ever be collectable as this particular habit of barite is very brittle and unable to withstand the jarring force necessary to split open the septaria.

The typical result of using a sledge hammer to break the tenacious limestone is many small glass-like fragments of larger crystals spilling out of the opened pockets. However, rare smaller but complete crystals of barite are obtainable by the patient collector. The collector, willing to put forth the time and effort necessary to dissect several septaria, stands a fair chance of recovering a small but complete barite crystal.

These barite crystals are generally clear with internal feathering and may have vitreous or etched faces. Thicker masses and large crystals may be gray, purple, yellow or rarely blue.

Barite is the second most common mineral, after ferroan dolomite, found in the limestone septaria at the Monroeville locality. Veins of barite up to 5 centimeters thick, sandwiched between ferroan dolomite, can be seen on the surface of most unbroken septaria.

As these veins approach large pockets in the septaria the barite forms large bladed crystals. Isolated smaller crystals resting on ferroan dolomite also occur, but are less common. These smaller crystals are likely part of the same barite event, the only difference being the amount of the mineral emplaced. The crystal form and habit are similar to the larger crystals, and the time of deposition appears simultaneous.

No examples of 4th generation ferroan dolomite on barite have been found. An excellent example of a complete isolated barite crystal on ferroan dolomite with calcite and aragonite is displayed in the photo to the left. This crystal is quite large in comparison to most isolated crystals which are generally less than 2 centimeters in size. 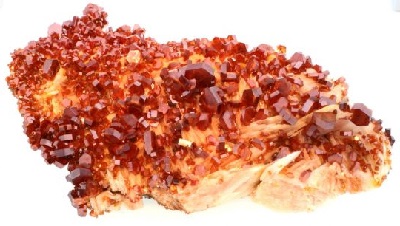 Like celestine, a similar sulfate commonly found in Ohio, barite forms crystals in the normal class of the orthorhombic system. In fact, some local collectors have mistaken the barite at the Monroeville locality for celestine because of the physical similarities of the two minerals and the fact that celestine is more common in the nearby Devonian and Silurian limestones and dolomites. The barite crystals at this locality are generally tabular, although thin prismatic crystals as seen in the photo above have also been found.

At the Monroeville locality, barite has a unique morphology, which often causes the crystals to have a mix of vitreous and crude faces. Discounting the fact that some crystals of barite have been heavily corroded from exposure to the elements of the river, many of the fresher crystals on the inside of septaria have certain naturally rough faces.

These rough, rounded, etched or feathered faces make the task of identifying additional modifications nearly impossible. A very few sporadic crystals without distorted faces have also been observed but are not as common. The crude faces are generally an indication of the rate at which the crystals formed, and furthermore that some faces likely grew too quickly to fully develop.

While the basal pinacoid, macrodome, brachydome and macropinacoid faces are usually sharp with a glass-like polish, other faces like the unit prism and brachypinacoid faces are more often rough and uneven. Occasionally the macropinacoid will also be rough as well as any additional macrodome faces. A typical example of this phenomenon is displayed in the photo to the left.

Notice how the unit prism has unique stress mark edges as if this face was stretched away from the surrounding sharper faces. The center of this face is smooth, but does not have the glass like polish found on many other faces of this crystal. This is very characteristic of the unit prism faces and may indicate that the unit prism formed slightly too fast.

The macropinacoid and brachypinacoid are often much rougher, almost to the point of being unidentifiable. These faces likely developed at an even faster rate. Another example of this development can be seen in the crystal in the photo to the lower left. This crystal has 3 sets of macrodome faces. Notice that the main macrodome is sharp and the succeeding macrodome faces are increasingly crude.

This effect is often amplified in very large crystals, causing the macropinacoid and/or brachypinacoid to have feathered faces. Crystals larger than 2 centimeters in size are also more opaque with multiple growth faces and are less distinct than crystals of smaller size. An example of this is pictured to the lower right Larger crystals are of the same form as the small isolated crystals, but are merely elongate along the Y axis of the crystal.

Smaller crystals are typically water clear with well defined faces and unique crystalline shaped bubble inclusions. These are viewable inside the crystal in the photo to the lower left. Most barite will have these inclusions, but smaller crystals tend to display this characteristic best.

In addition to the difference in color and clarity, large crystalline masses of barite from the septaria have a few other unique characteristics, rarely observed among small isolated crystals. First, while these masses are often created by multigrowth parallel or bifurcated crystals that over grew the pockets, smaller crystals tend to be singular individuals.

Second, the larger crystals and masses are often opaque with patches of pale yellow, purple, gray and rarely blue color. The specimen in the photo to the left is an example of pale purple massive crystalline barite. Large masses occasionally show a medium salmon red fluorescence under short wave ultraviolet light as displayed in the photo to the right. The fluorescent yellow mineral is massive ferroan dolomite.

I hope you found this article on Barite useful as a reference. Do stick around the website as we have tons of mineralogy and gemstone related content to be published every month!